Gianna will be pursuing a career in International Business. She plans to represent the United States on the global stage, either as a United Nations Representative or a foreign diplomat.

Kaveh’s career plan is to be a reconstructive surgeon, possibly in an emergency room. He plans to work in our nation's diverse communities in order to help underserved and under-represented groups.

Madeline enjoys helping young people in their struggles and wants to continue to do so after receiving her degree.

Emily will pursue a major in criminology. She would like to one day work as a criminologist in the justice system and give hope to those who have lost their hope.

Speak Up Newport congratulates each of these outstanding students as well as all of the other applicants. All of the applicants this year were outstanding and selecting the winners was a difficult task.

Speak Up Newport, Newport Beach’s Community Forum for discussion of civic issues, awards these scholarships on an annual basis in addition to sponsoring the annual Mayor’s Dinner, and monthly programs of community interest. Recent programs have included Homelessness, Intolerance In Our Community, Police Department Cold Case Investigations, Sea Level Rise and the General Aviation Improvement Plan at John Wayne Airport. Meetings are open to the public without reservations on the second Wednesday of the month in the Community Room at the Civic Center. The reception, hosted by the Bungalow Restaurant, starts at 5:15 PM with the program starting at 6:00 PM and usually ending at 7:00 PM.

The Scholarships are funded through revenue from the Mayor’s Dinner, private donations to the scholarship fund and an endowed scholarship fund. Donations to this worthwhile program are accepted at any time and are tax deductible. Make checks out to the Speak Up Newport Foundation, a 501 (c)(3) corporation. For further information go to www.SpeakUpNewport.com.

To signup or renew a Speak Up Newport Membership, click the links below to visit the SUN on-line store or to download the 2021 Membership Application: 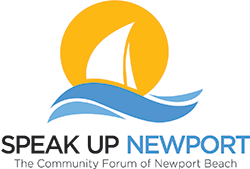